A former Clymer resident recently completed his goal of running a marathon race in all 50 states.

Joe Lepkowski, who started running in his 30s, competed in his 80th marathon Oct. 23. At 61 years of age, he finally achieved his goal after working hard to pursue his dream of running marathons.

“It’s been a long haul,” Lepkowski said. “At first, I had a goal of doing 50 marathons by the time I turned 50. I’m kind of a goal-oriented person, so after than I said, ‘Why don’t I do the states I haven’t done and do one in every state?’”

When Lepkowski started running in his 30s, he started with the 5k and the 10k races, but decided he needed to challenge himself with something harder. He said the marathon proved to be “such a big challenge,” that he decided to keep running marathons.

Lepkowski also used to participate in organized bike rides but said that when the group he was involved in stopped having them, he transitioned “exclusively” to running.

“It seemed like the more I did it, the easier it became, and I enjoyed doing it,” he said.

As Lepkowski’s marathon journey progressed, he began traveling across the country for different marathons, which ultimately led to his goal of running a marathon in each of the 50 states. He said it took about 24 total years to accomplish both his original goal of 50 marathons by the age of 50 and his secondary goal of competing in marathons in every state.

“I’m happier than anything,” he said. “It’s good to get it over with, and it was quite a journey. Every marathon has its own journey or memory.”

Lepkowski was raised in Clymer near Peek’n Peak, but has lived in Chicago since 1984, after completing dental school. After working as a dentist for many years, Lepkowski said he currently is “semi-retired” and just volunteers as a dentist at a senior center.

After retiring and completing his two goals as a marathon runner, Lepkowski is determined to keep setting goals and putting in the hard work to accomplish them. However, first he is going to enjoy the accomplishment he just achieved.

“I don’t know what’s next, but I’m kind of giving it some time before I set another goal,” he said.

One possibility Lepkowski is considering next is the ultra-marathon.

“I don’t know if I have it in me but I kind of want to do one before I die just to say that I did it,” he said.

Lepkowski said he is familiar with an ultra-marathon race at Lake Tahoe that requires runners to start at midnight and allows runners at 24-hour time limit to complete the race. Having previously competed in a marathon at Lake Tahoe, he said the elevation is a serious challenge; however, if he could find a flat location for an ultra-marathon he would consider trying it.

“The other thing I’ve thought about is doing marathons in all seven continents,” he said. “There are people that have joined the bandwagon to do one marathon in every continent. I don’t know, but that may be on the horizon.”

Regardless of his next goal, Lepkowski is planning on continuing to pursue his passion for running.

“It was a good journey, and I’m going to continue to run because it’s my daily routine,” he said. “I think it detoxes me mentally and physically. It’s a good time to just think, and I kind of pay attention to my body and how I’m feeling. If I’m tired that day, I don’t run as fast. If I’m having a good day, then I run faster.”

Marathon running has taught Lepkowski how to persevere through adversity. Over the course of both his training and his 80 marathons races, he has run in rain, snow, high heat and tornadoes. While Lepkowski said running against the elements can be difficult, he said he has learned that anything is possible.

“You can do anything if you put your mind to it,” he said. “I like the challenge and the detoxing, that it gives me the mental clarity.”

In addition to his perseverance, Lepkowski said he has received the strong support of his family over the years, enabling him to pursue his dreams. He said his recent milestone marathon was special because his family joined him in New Jersey to cheer him on.

“My family has been very supportive and they’ve seen me in a lot of marathons, and it’s always good when you have a support team of 20 people cheering you on and to hug you at the end of the finish line. I couldn’t have done it without them every step of the way.”

After achieving his own dreams, Lepkowski wants to encourage other people to set goals, take chances and find success. He encourages others to start small and keep chasing their dreams.

“It’s very gratifying, just a sense of accomplishment with anything you can do,” he said. “It gives you more encouragement to go outside your boundaries and go outside your fears and try doing new things.”


Today’s breaking news and more in your inbox

Fri Nov 11 , 2022
A nurse peers into a Covid-19 patient’s room before entering at the emergency department at the Southwestern Vermont Medical Center in Bennington on Monday, Dec. 13, 2021. Photo by Glenn Russell/VTDigger This commentary is by Bill Schubart of Hinesburg, author of nine books of fiction, a former VPR radio commentator […] 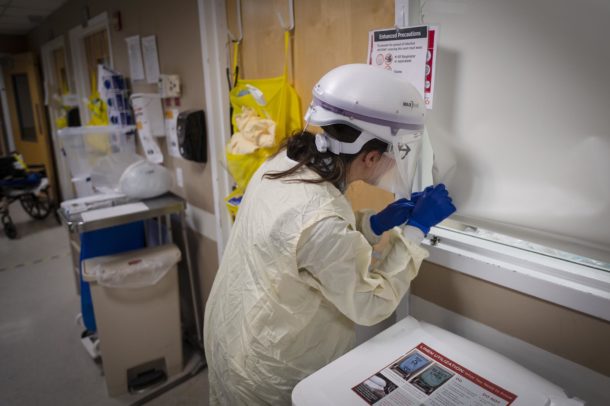