“Could you get into the six figures? Sure,” Cohen said. “It’s generally not quite that outrageous but it’s generally in the $30,000–$80,000 range.” I privately noted that a set of veneers could cost me a year’s salary. A patient earlier that day had balked at the price: “That’s more than […]

“Could you get into the six figures? Sure,” Cohen said. “It’s generally not quite that outrageous but it’s generally in the $30,000–$80,000 range.” I privately noted that a set of veneers could cost me a year’s salary.

A patient earlier that day had balked at the price: “That’s more than the art hanging in my house that I bought when I felt like I made it!” he told Cohen, as relayed to me. Cohen replied: “Do you use that piece of art every second of your life? You do your teeth.”

Cohen elaborated to me, “There is no article of clothing, there is no piece of jewelry, fashion accessory, no art on the wall that you’re going to get as much value out of as your smile,” later adding, “It’s the brightest thing on your face.”

Los Angeles attracts dreamers. They’re usually aspiring actors—but very occasionally, they’re also dentists. Cohen grew up in Florida—“Lots of bright, shiny teeth. Less clothing.”—but always knew he wanted to be a dentist in Los Angeles. He came along at precisely the right time: at 36 years old, he has essentially grown up alongside the cosmetic dentistry industry. Research by dentists John R. Calamia and Richard J. Simonsen in 1982 found that it was possible to improve teeth by etching porcelain for veneers. The idea, full of cosmetic potential, arrived just in time for the 1980s. It was Pandora’s Box, if Pandora’s Box was full of scary-perfect teeth.

“At the time, my ideas were connected to the saving of tooth structure with these advances, not as much to the ‘cosmetic’ benefits,” Simonsen wrote in a 2007 article. “Perhaps this conservative, minimally invasive philosophy that I have is responsible for the visceral repulsion I feel from some of the enhancement cases (I would not call them treatment, as this suggests a health benefit) I see published in the tabloid press.” As he reiterates throughout: “Where is the professional and public outrage at the troubling trends in the marketing and selling of ‘cosmetic’ dentistry that besiege our profession today?”

Ten years later, whatever outrage the actual inventor of veneers feels is completely absent on Instagram. Many dentists who specialize in cosmetic procedures show off their handiwork there. One can find Cardi B’s dentist or the Kardashian family’s dentist on the platform, with followers numbering in the tens if not hundreds of thousands.

“Billionaires aren’t shopping on Yelp for their dentist,” Cohen, who also offers management services for other dentists, noted. And when one considers that for some, teeth are just another lifestyle product, the social-media lure makes sense. (Dr. Woo told me he found Cohen “on the gram.”) The social-media marketing explosion is paying off: according to a 2012 report, dentists now make more per hour than doctors.

But what are you really buying when you buy a new head of teeth? Cohen showed me before and after photos of anonymous clients. An older man’s gummy mouth full of missing teeth morphed into carnivorous perfection; a younger woman’s chipped front teeth materialized into a wall of white. In photo after photo, the less-than-perfect had been subtly smoothed over—and not even in a noticeably dramatic way. It was more like everything had been hit with a gloss—or, fittingly, with an Instagram filter.

Is it safe to go to the dentist? What doctors are doing to prevent the spread of the coronavirus

Sat Aug 22 , 2020
America’s dental offices are reopening after months of handling only emergencies. All 50 states now allow routine dental care, like teeth cleanings and cavity fillings, but dentistry is considered one of the highest risk professions for the coronavirus. “If someone asked me in January, ‘Hey, ever think about taking three […] 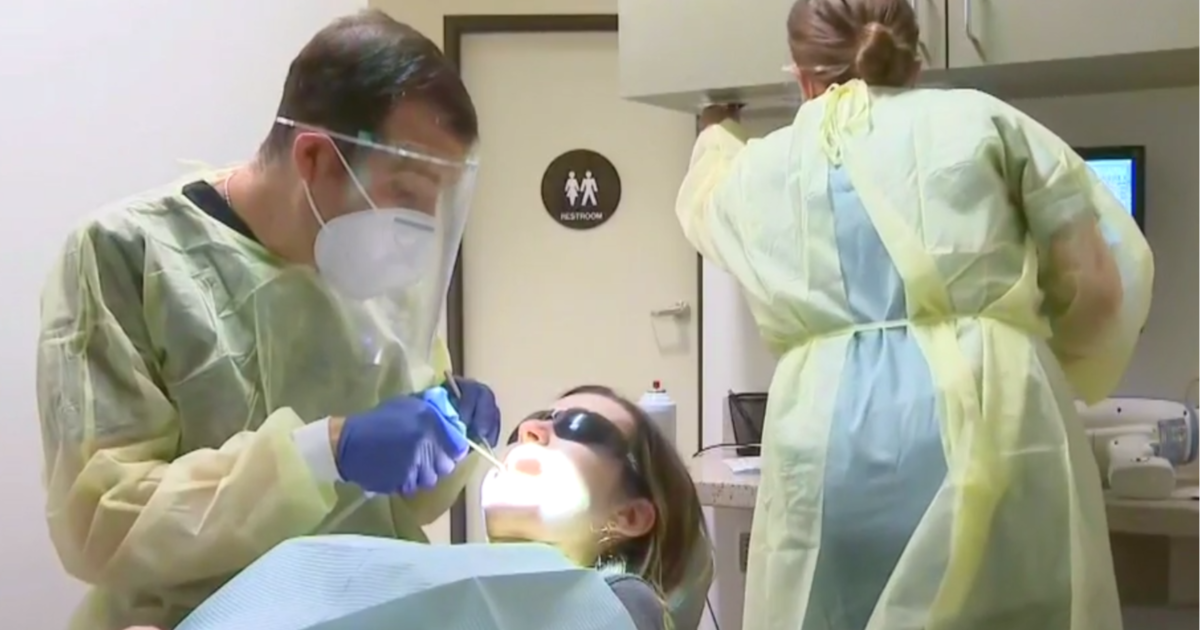