November 5, 2022 at 3:11 p.m. EDT Medical residents watch and assist during a Caesarean section at the Rabia Balkhi public women’s hospital, one of Kabul’s busiest, on Oct. 23. Despite the ongoing training of 55 residents, the hospital is facing an uptick in patients, which has spread the remaining […]

KABUL — After the Taliban took control of Afghanistan last year, nearly a third of the resident doctors in Omeida Momand’s class at a Kabul women’s hospital fled the country, she said, leaving the staff stretched thin.

Momand decided to stay, to finish the last step in her 11 years of training to care for Afghanistan’s women. By day, she examines gynecology patients and monitors mothers with high-risk pregnancies in a room sometimes so crowded that patients lie on the floor. Night shifts are spent performing emergency Caesareans.

Her determination to practice medicine in her home country has aligned, ironically, with the Taliban’s own interests. In the highly conservative Islamic society the Taliban hopes to create, officials say, women should be cared for by other women. That means educating more female doctors.

This marks a rare instance of the Taliban publicly and loudly promoting women’s education and employment. Training female doctors and nurses is part of the movement’s effort to prove it can provide essential services while building a society structured on gender segregation.

Muhammad Hassan Ghyasi, acting deputy minister of public health, said in an interview that his ministry has received “clear instructions from the top level” to bring policies in line with the Taliban’s strict interpretation of sharia, or Islamic law. A new policy submitted recently to the Taliban’s supreme leader, Haibatullah Akhundzada, for approval would formalize a rule already applied in some hospitals that female health workers should treat women, while male health workers should treat men.

Ghyasi said the policy will stipulate that if there is no qualified female doctor available, a female patient can see a male doctor. But with Afghanistan’s health system under strain — and an economic crisis fueled by Western sanctions exacerbating hunger and sickness — the need for qualified medical professionals of both genders is greater than ever.

The Taliban effort to expand medical education for women, especially in fields traditionally dominated by men, contrasts with the government’s draconian restrictions on girls and women. Since taking power, the Taliban has barred many girls from secondary school and shut women out of most professions. This fall, authorities prohibited female university aspirants from enrolling in subjects including journalism, engineering and economics.

The educational restrictions seem certain to limit the number of women in the coming years who can train as doctors. Other Taliban policies, such as requirements in some areas that women only travel with male guardians, have hamstrung the efforts of female doctors to practice.

But at several government-run institutes for nursing, radiology and other health fields, the proportion of women admitted — at least 46 percent this semester — represents a slight increase compared with 2020 figures, according to the International Committee of the Red Cross, which supports the institutes.

Taliban authorities also point to residency programs like the one at Rabia Balkhi Hospital, where Momand works, as evidence of their commitment to educating female health workers. Hospital director Seemin Mishkin Mohmand said the Taliban health ministry has been supportive of her ambitions to expand the program and offer more-advanced training.

Momand is set to graduate this fall at the top of her class, and hopes to open a gynecology clinic in a rural province.

“When I was a child, this was my hope — to become a doctor, to serve my country and my people, especially to serve our poor women,” she said.

A health system on life support

The needs in Afghanistan are enormous. The maternal mortality rate is among the highest in the world. Worsening malnutrition has contributed to a rise in premature births and pregnancy complications, according to Hamida Hamidi, a doctor at Rabia Balkhi and head of its training programs.

The health system, heavily reliant on foreign aid, neared collapse in the wake of the Taliban takeover. After billions in funding were cut, the ICRC and the United Nations stepped in last year to cover tens of thousands of health workers’ salaries. Still, some hospitals have closed. Significant numbers of doctors have left the country. And with war over, the volume of patients seeking care is rising.

The main hospital in Wardak, a province neighboring Kabul, used to be on the front line of fighting. Since the end of the war, the number of patients has doubled, hospital director Mohammad Nader Rahmani said.

As in many areas in Afghanistan, families here prefer that female relatives see women doctors. But while women make up a majority of patients, they account for only a quarter of the hospital’s doctors.

The hospital, run by the Swedish Committee for Afghanistan, recently hired a female radiologist, Rahmani said. But the limited pool of female health workers has made it difficult to hire more.

The Taliban’s stated goal of creating a separate but equal health system for men and women remains a distant dream, hospital administrators and international aid workers said. “In the short term, this policy is impossible to implement,” Rahmani said.

In Afghanistan, as in many other countries, the essential task of caring for mothers and babies has long been dominated by women. Women make up a significantly smaller proportion of other medical specialists, Afghan doctors and hospital administrators say.

Six years ago, the World Health Organization raised the alarm about how a lack of female health-care workers was preventing Afghan women from receiving adequate care.

But it wasn’t always this way. When Hamidi was in medical school in the early 1990s, the country had female neurosurgeons and urologists, she recalled. When civil war broke out in 1992, many fled to the West. The Taliban took power, for the first time, four years later and “everything changed,” Hamidi said. Families grew uncomfortable with their daughters entering medical fields outside of maternal health, and that attitude outlasted initial Taliban rule.

At the hospital in Wardak and others run by international organizations, gender segregation has not yet been enforced, administrators say. The ICRC has also not observed gender segregation at government hospitals it supports, according to Lucien Christen, ICRC spokesperson for Afghanistan.

On a recent Saturday afternoon, a young woman named Shayma who had gone into labor arrived at the hospital in Wardak, needing an emergency C-section. The only doctors available at that time were men. After some convincing, Shayma’s husband and brother agreed to let two male doctors perform the operation alongside two female midwives.

How Afghan women took on the Taliban, as told through their text messages

If male doctors had been prohibited from operating on women, “we would have lost our daughter and my grandson,” said Shayma’s mother, Sharifa, who uses only one name.

While gender segregation has not been enforced in the Wardak hospital, at least so far, three current or former female surgeons at public hospitals in Kabul said male and female staff have already been forced to work separately.

One of the surgeons, a first-year resident from Wardak, said she wanted to become a surgeon to help the women of her province. But in September 2021, Taliban officials barred women at her hospital from working night shifts and said they must work in separate rooms from their male colleagues.

“The problem is you cannot separate men and women because we need to work together,” said the resident, who spoke on the condition of anonymity for fear of retaliation. “That’s why we stated we cannot be separated. They sent us home and suspended us.”

More than a year later, she has not been allowed to return to her post.

Kobra Safi worked at a teaching hospital in Kabul as a plastic reconstructive surgeon until August 2021, treating burn patients. Several days after Kabul fell, Taliban officials told her she could no longer have contact with her mentor, a male surgeon. “That destroyed my dream of doing plastic surgery,” she said.

Safi got on an evacuation flight two months later and spent nearly a year in Abu Dhabi in the United Arab Emirates before resettling in Canada this September.

Even as the Taliban says it is looking to expand medical training for women, other policies are limiting the ability of women to provide health care — or access it.

Fouzia Shafique, senior health adviser for UNICEF in Afghanistan, said the agency is hearing more and more reports, especially in the country’s south and east, of women being told at health facilities that they must arrive with a male guardian to get treatment. Female health workers, meanwhile, have faced “significant issues” traveling to work in some areas because they must find a male relative to take them.

Ghyasi, the deputy health minister, said he had “not seen” reports of women being turned away from health facilities, though he added: “We are not denying it, because at the moment we have some problems.”

The Taliban closed the high school Wajeha Kazimi, 19, attended just before she finished 12th grade. She was still able to graduate, and spent more than a year studying for the university entrance exam at a test-prep center in Kabul. In September, she survived a suicide bombing there that left more than 50 people dead.

Kazimi hopes to go into public health or pediatrics, and ranked medicine as her top choice on the university exam.

“When we were choosing, we remembered our friends who were killed who wished to become a doctor,” she said. Her 15-year-old sister, though, remains shut out of formal education.

A year of peace in one of Afghanistan’s deadliest provinces

The Taliban’s curbs on girls’ education are also costing the country some of its best male doctors. Five of the eight surgeons at the Emergency NGO-run trauma hospital in Kabul left the country after the Taliban takeover — some so their daughters could continue their schooling, medical coordinator Dimitra Giannakopoulou said.

Susannah George and Zahra Nabi in Kabul contributed to this report.

Sun Nov 6 , 2022
Post-COVID, the way that we work out changed: Fewer people are signing up for gym memberships to stay strong and healthy, opting instead for virtual fitness classes or home-gym solutions that deliver real results in a more convenient, affordable way. But spending less on pricey gym memberships, boutique fitness, and […] 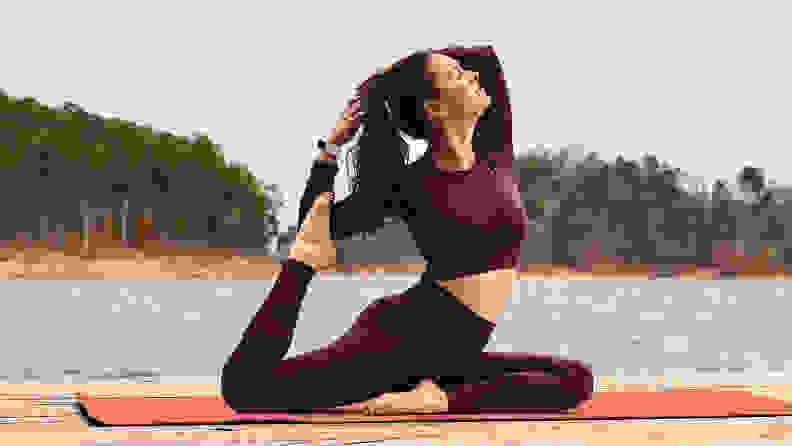