But behind the walls of the facility, nursing home officials had failed to take the most basic measures to prevent the spread of the highly contagious virus after learning two residents were infected, according to a blistering report released Tuesday by the Centers for Medicare and Medicaid Services, which resulted […]

But behind the walls of the facility, nursing home officials had failed to take the most basic measures to prevent the spread of the highly contagious virus after learning two residents were infected, according to a blistering report released Tuesday by the Centers for Medicare and Medicaid Services, which resulted in severe penalties.

By the time the viral firestorm had finished sweeping through the nursing home, all 63 residents were infected and at least 10 had died. Medicare moved Monday to terminate the Andbe Home from its program, cutting it off from federal dollars and imposing thousands of dollars in fines.

Government inspectors found that infected residents were separated from their healthy roommates by little more than a privacy sheet. Communal dining continued for two days. Multiple staff members failed to wear masks — even after the outbreak took hold.

In an email Tuesday to The Washington Post, the nursing home administrator disputed some of the findings outlined in the report and stood by the response to the outbreak, saying the facility had immediately quarantined infected residents and that staff wore full personal protective equipment, including goggles, masks and gloves.

“This is a terrible virus, but I am proud of how our staff has battled COVID-19 over the course of the pandemic, coming to work every day under extenuating circumstances, and caring for all of our residents,” Mapes wrote. “I am also proud of and thankful for the mutual support between Andbe Home and our community during trying times for everyone.”

The Medicare report, however, said the facility’s failures had “placed all residents in immediate jeopardy by the spread of Covid-19 to all residents.”

The virus’s rampage through the nursing home came amid a surge of infections in Kansas’s Norton County, which led the nation in per capita case increases between Oct. 12 and Oct. 19 and ranked second this week, according to a Post analysis. Before Oct. 13, the county near the Nebraska border had been spared virus-related deaths.

Now, there are clusters of cases at the nursing home, where 55 of 70 staff members tested positive for the virus, as well as at a correctional facility and a bank. City offices are closed to the public, municipal court is postponed and multiple businesses have temporarily shut their doors. The funeral home has posted a wave of obituaries for people who lived at the Andbe Home: a stained glass artist with pieces displayed around town, a onetime staffer turned resident, a skilled home cook known especially for “fried chicken with all the fixins.”

Like many parts of rural America, the county of about 5,000 had resisted masks and other measures aimed at preventing the spread of the coronavirus. The city police department was cheered in June after announcing it would not enforce a mask mandate imposed by Gov. Laura Kelly, a Democrat.

“For months, many have mistakenly shared the idea that this virus would never reach our rural and lower-population communities,” the governor said during a news conference last week. “Now, it is worse in those towns and counties than it is in our cities.”

She called the deaths at the Andbe Home “a stark reminder” of the threat posed by the virus.

Medicare inspection reports suggest resistance to masks at the nursing home, a sprawling, single-story facility that was rated as average by Medicare. Run as a nonprofit, the home had several health and safety deficiencies going back to 2012, records show, and recently had a change in administration.

When inspectors visited May 20 on behalf of the Centers for Medicare and Medicaid Services, more than four months before the outbreak at the home, they discovered that all staff members, except one, “walked up and down the halls, in the dining room, in residents’ rooms, and at the nursing station” without masks. Administrators had offered no training and issued no policies for dealing with the coronavirus.

The Andbe Home was cited for failing to implement measures recommended by the Centers for Disease Control and Prevention — a failure, the inspectors wrote, that placed every resident in jeopardy. By the next day, the facility was back in good standing after putting coronavirus policies and a mask requirement in place.

Last week, the Centers for Medicare and Medicaid Services fined the facility $14,860 for those failings, writing in a letter that the penalty was “based on the fact that deficiencies that constitute a level of actual harm or above were found on the current survey.” Representatives of the agency did not immediately respond to a request for comment on the fine.

“We knew after the May 2020 inspection that we had significant work to do, and we did it,” Mapes said in her email. She added: “We strive to provide the highest quality care possible for every one of our residents, and correcting these citations was our top priority.”

Yet photographs posted on the facility’s Facebook page as recently as last month showed many residents gathered for indoor activities without face coverings, which the CDC says should be worn by those outside their rooms. Several staff members pictured had their masks on improperly, below the nose.

A former employee who spoke on the condition of anonymity because of fear of retribution said that even after the inspection, it remained “a struggle to get people to wear PPE.”

Nationally, nursing homes have accounted for about 40 percent of covid-19 deaths. The facilities are more vulnerable to the airborne virus because of their congregant settings and communal meals, and because staff members interact with multiple residents, said John Rowe, a professor of health policy and aging at Columbia University’s Mailman School of Public Health and former CEO of Aetna.

“But it in fact is still possible not to have any covid in a nursing home,” he said, citing studies of facilities that took precautions. “It is not inevitable.”

The first sign the virus had made its way into the Andbe Home came Oct. 5, when two residents began showing symptoms, according to the federal inspection report. Coronavirus rapid tests that day confirmed the infections. But the facility did not follow its own plan for containing the virus. Rather than moving ill residents to a special care unit as described in the plan, staff kept them with their roommates. It wasn’t until Oct. 7, when lab results confirmed the infections, that all residents were quarantined.

That day, Mapes took to Facebook to announce the home was experiencing “a COVID positive resident.”

Staff were supposed to use personal protective equipment while caring for infected patients, according to the Andbe Home’s plan. But even after multiple residents were confirmed as infected, staff members cared for them without masks, the inspectors said.

A consultant who joined a physician in visiting the facility Oct. 17 to evaluate the infected patients told inspectors she saw six staff “at various times with their masks removed.” She also saw a staff member “in a resident’s room with her mask pulled down to her chin, not wearing goggles, and sitting next to the resident.”

Many areas unscathed during earlier waves of the pandemic felt they were insulated from the pandemic, said Gianfranco Pezzino, a senior fellow at the Kansas Health Institute and health officer in Shawnee County, home to Topeka. Norton County was among more than two-thirds of Kansas counties with no coronavirus restrictions as of Oct. 15, according to a report by the institute.

“The line that I kept hearing was, ‘What happens in northwest Kansas is different from what happens in the Kansas City area — we can’t use the same measures and the same interventions in both settings because they’re too different,’ ” Pezzino said. “It’s true there are differences, and I’m all in favor of local control to the extent that it’s possible and makes sense. But it’s also true that just because they hadn’t seen as many cases up until this moment really didn’t make them invulnerable or protect them against the virus.”

For the family of Donna Hale, hearing about the outbreak at the Andbe Home “struck fear in our hearts,” said her daughter, Susan Hale of Lincoln, Neb. At 93 years old, she was beloved for her sense of humor. She lived at the Andbe Home after working there years earlier, and her children had been pleased with the care.

At first, she showed no symptoms. But after a few days, her condition deteriorated. The family held out hope “no matter how slight,” Susan Hale said. They grew more hopeful on Saturday, when Donna Hale — a mother of three who raised her family on a Kansas farm — seemed to perk up. She died later that day.

Jacqueline Dupree contributed to this report.

Sun Nov 1 , 2020
Image caption Altnagelvin Hospital is treating dozens of Covid patients A Londonderry woman has made an emotional plea from her hospital bed for the public to take Covid-19 seriously. Sandra Kelly, 58, told BBC News NI she feared she would die and would never see her 85-year-old mother again. It […] 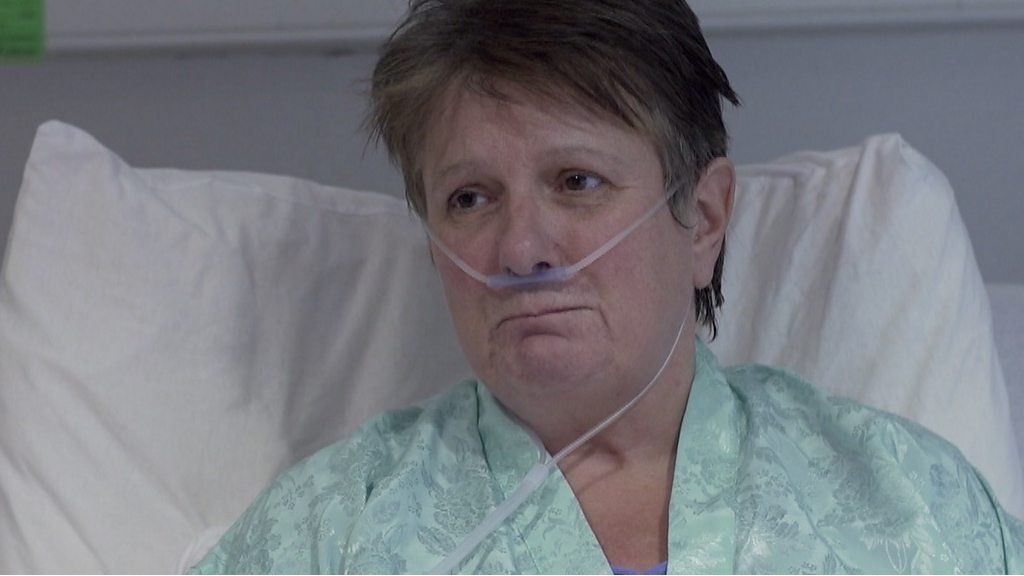