Welcome to Impact Factor, your weekly dose of commentary on a new medical study. I’m Dr F. Perry Wilson of the Yale School of Medicine. As soon as the pandemic started, the search was on for a medication that could stave off infection, or at least the worst consequences of […]

Welcome to Impact Factor, your weekly dose of commentary on a new medical study. I’m Dr F. Perry Wilson of the Yale School of Medicine.

As soon as the pandemic started, the search was on for a medication that could stave off infection, or at least the worst consequences of infection.

One that would be cheap to make, safe, easy to distribute, and, ideally, was already available. The search had a quest-like quality, like something from a fairy tale. Society, poisoned by COVID, would find the antidote out there, somewhere, if we looked hard enough.

I’m not here today to tell you that the antidote has been found — no, it takes large randomized trials to figure that out. But I do want to tell you about apaper that, unlike so many that came before, lays out the argument for a potential COVID preventive so thoroughly and so rigorously, that it has convinced me that this little drug, ursodeoxycholic acid (UDCA) — you may know it as Actigall, used for an uncommon form of liver disease — may actually be useful to prevent COVID infection.

How do you make a case that an existing drug — UDCA, in this case — might be useful to prevent or treat COVID? In contrast to prior basic-science studies, like the original ivermectin study, which essentially took a bunch of cells and virus in a tube filled with varying concentrations of the antiparasitic agent, the authors of this paper appearing in Nature give us multiple, complementary lines of evidence. Let me walk you through it.

All good science starts with a biologically plausible hypothesis. In this case, the authors recognized that SARS-CoV-2, in all its variants, requires the presence of the ACE2 receptor on the surface of cells to bind. 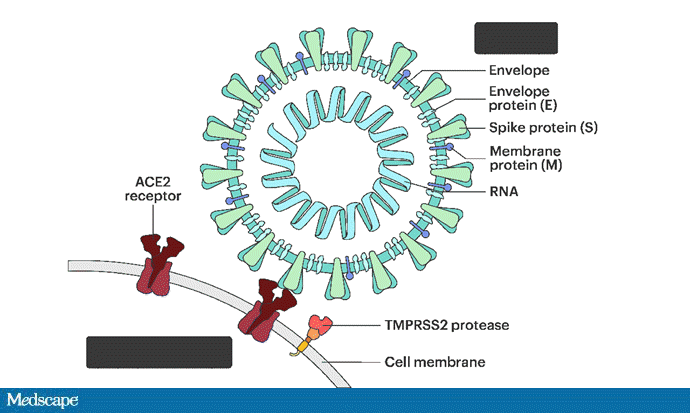 That is the doorway to infection. Vaccines and antibodies block the key to this door, the spike protein and its receptor binding domain. But what if you could get rid of the doors altogether?

The authors first showed that ACE2 expression is controlled by a certain transcription factor known as the farnesoid X receptor, or FXR. Reducing the binding of FXR should therefore reduce ACE2 expression. 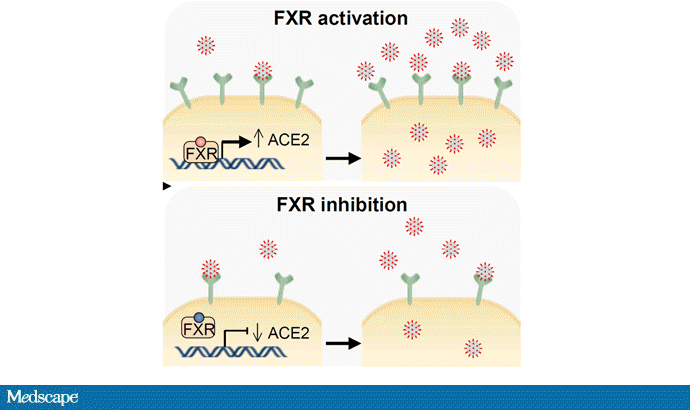 As luck would have it, UDCA — Actigall — reduces the levels of FXR and thus the expression of ACE2 in cells.

Okay. So we have a drug that can reduce ACE2, and we know that ACE2 is necessary for the virus to infect cells. Would UDCA prevent viral infection?

They started with test tubes, showing that cells were less likely to be infected by SARS-CoV-2 in the presence of UDCA at concentrations similar to what humans achieve in their blood after standard dosing. The red staining here is spike protein; you can see that it is markedly lower in the cells exposed to UDCA. 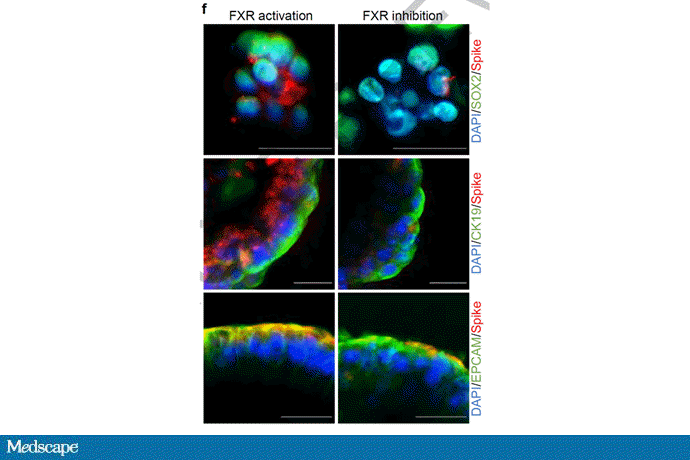 So far, so good. But test tubes aren’t people. So they moved up to mice and Syrian golden hamsters. These cute fellows are quite susceptible to human COVID and have been a model organism in countless studies. 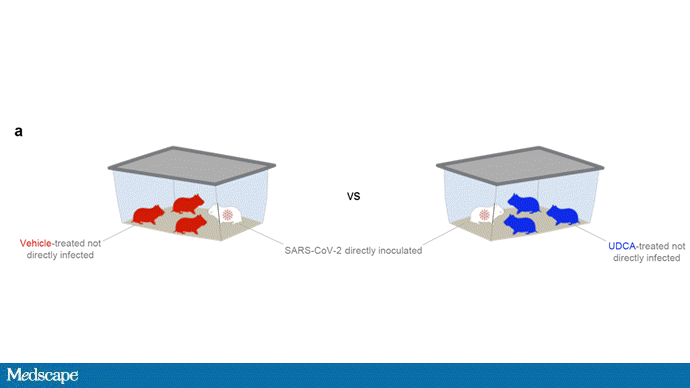 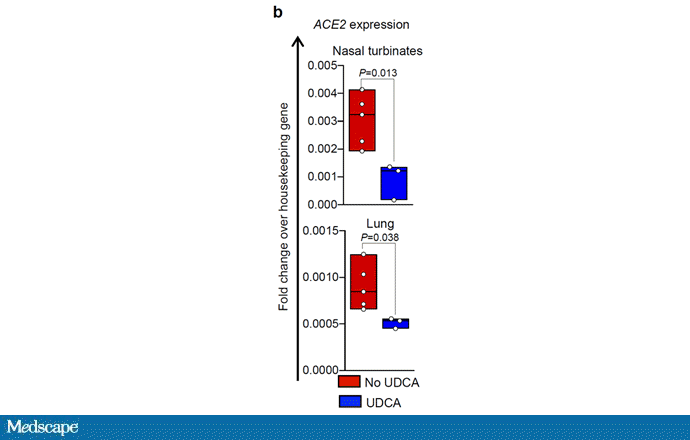 Of course, mice aren’t humans either. So the researchers didn’t stop there.

To determine the effects of UDCA on human tissue, they utilized perfused human lungs that had been declined for transplantation. The lungs were perfused with a special fluid to keep them viable, and were mechanically ventilated. One lung was exposed to UDCA and the other served as a control. The authors were able to show that ACE2 levels went down in the exposed lung. And, importantly, when samples of tissue from both lungs were exposed to SARS-CoV-2, the lung tissue exposed to UDCA had lower levels of viral infection. 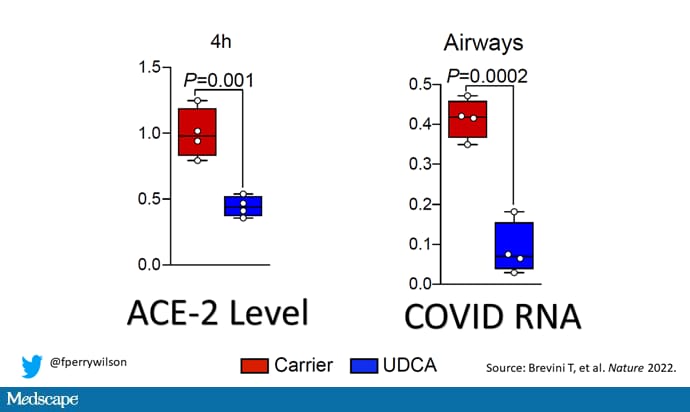 They didn’t stop there.

Eight human volunteers were recruited to take UDCA for 5 days. ACE2 levels in the nasal passages went down over the course of treatment. They confirmed those results from a proteomics dataset with several hundred people who had received UDCA for clinical reasons. Treated individuals had lower ACE2 levels. 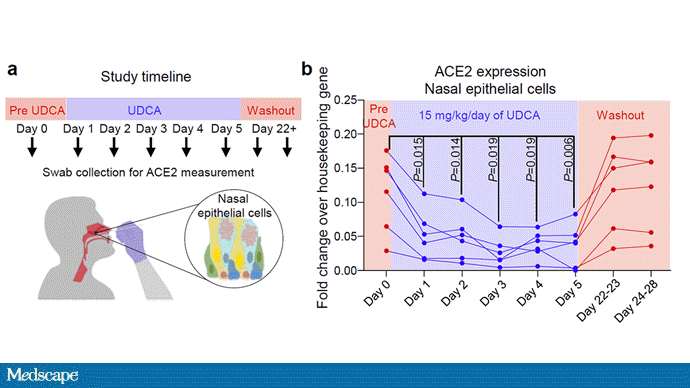 Finally, they looked at the epidemiologic effect. They examined a dataset that contained information on over 1000 patients with liver disease who had contracted COVID-19, 31 of whom had been receiving UDCA. Even after adjustment for baseline differences, those receiving UDCA were less likely to be hospitalized, require an ICU, or die.

Okay, we’ll stop there. Reading this study, all I could think was, Yes! This is how you generate evidence that you have a drug that might work — step by careful step.

But let’s be careful as well. Does this study show that taking Actigall will prevent COVID? Of course not. It doesn’t show that it will treat COVID either. But I bring it up because the rigor of this study stands in contrast to those that generated huge enthusiasm earlier in the pandemic only to let us down in randomized trials. If there has been a drug out there this whole time which will prevent or treat COVID, this is how we’ll find it. The next step? Test it in a randomized trial.

F. Perry Wilson, MD, MSCE, is an associate professor of medicine and director of Yale’s Clinical and Translational Research Accelerator. His science communication work can be found in the Huffington Post, on NPR, and here on Medscape. He tweets @fperrywilson and his new book, How Medicine Works and When It Doesn’t, is available for pre-order now. 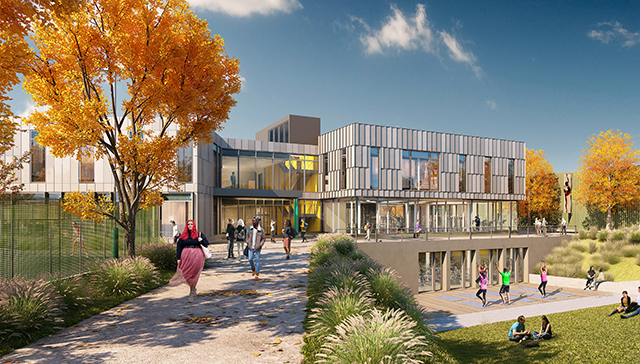