If you’re looking to get your sweat on, the sauna suit gym-wear trend may be for you. If you’re not familiar, a sauna suit is an outfit designed to trap body heat and increase how much you sweat. Some gymgoers (and those who market this type of activewear) claim that […]

If you’re looking to get your sweat on, the sauna suit gym-wear trend may be for you.

If you’re not familiar, a sauna suit is an outfit designed to trap body heat and increase how much you sweat.

Some gymgoers (and those who market this type of activewear) claim that wearing the outfit during your workout will help you shed extra pounds, gain muscle, and sweat like never before.

On TikTok, the hashtag #saunasuit has 119 million views.

TikToker @meimonstaa (2.7M followers) posted a video on June 18, 2021, that now has 13.3M views, of her trying out a sauna suit and waist trainer during one of her workouts to see how much she would sweat. She claims she was dripping all over the treadmill and recommends the products she bought on Amazon if anyone is “interested in sweating like a crazy person.”

@shredskinz (145.7K followers) is the TikTok account for the brand ShredSkinz, which makes sauna suit activewear. One post shows a user dumping all the sweat accumulated in the suit after a workout; the video has 6.1M views. The brand also claims people have lost as much as four pounds in one workout while wearing their product in a video that now has 11.8K views.

But is sweating it out that much really good for your workout — or your health overall?

What Is a Sauna Suit?

A sauna suit is a waterproof tracksuit designed to make the wearer sweat more profusely than they would without it. The suits are usually made out of neoprene and resemble tracksuits or rain gear. They can be bought as full suits or just a top or bottom.

Sauna suits trap the exerciser’s body heat, causing their core temperature to rise, which is what leads to increased sweating.

What an Exercise Science Researcher Says About Sauna Suits

These clothes replicate heat adaptation (a term exercise scientists use to describe the process whereby the body adjusts to hotter temperatures) similarly to what would happen when we encounter hot, humid outdoor environments, says Lance Dalleck, PhD, a professor of exercise and sport science at Western Colorado University in Gunnison. You’re training your body to perform at a higher level in more extreme conditions.

Heat adaptation has various benefits, such as increased blood plasma volume, earlier onset of sweating, and more dilute sweat, Dr. Dalleck says. The increase in plasma volume — which is the volume of the liquid component of your blood, according to the Cleveland Clinic — is a measure of better overall cardiorespiratory fitness.

So, yes, the suit can help boost the intensity of your workout, Dalleck says.

A small study published in March 2018 in Temperature provided some evidence to back this up. The researchers found that exercising in a suit did increase sweat loss and physiologic strain compared with controls. They theorized that this might support heat adaptation over time, yet more research is needed to confirm this is what’s happening.

And when it comes to the claims about a sauna suit’s potential to boost weight loss, there may indeed be some truth there, too, Dalleck says.

In addition to sweating out some water weight, the increased core temperature (a result of wearing the suit) subsequently causes a longer-lasting metabolism boost after a workout, Dalleck explains. “This phenomenon is known as excessive post-exercise oxygen consumption (EPOC),” he says. “It can be expected that with chronic exercise with a sauna suit, there will be an overall greater caloric expenditure, which leads to greater weight loss.”

These suits may also help with post-workout recovery.

According to a research study published in April 2020 conducted by the American Council of Exercise (ACE) — Dalleck was a coauthor — when worn during recovery exercises, these suits improved overall endurance (during and after exercise) with no additional training.

Dalleck says sauna suits are typically worn for aerobic exercises but could also be used during resistance training such as weight lifting.

Who Should Try the Suit (and Who Should Avoid It)?

In another ACE study for which Dalleck was a coauthor, results showed sauna suits had benefits for exercisers who were overweight and obese. Blood glucose levels, resting metabolic rate, fat oxidation, body weight, and body-fat percentage all improved after an eight-week exercise program in which participants worked out in sauna clothes and compared it with working out in regular exercise clothes.

But there isn’t much research determining whether these suits are safe for certain high-risk populations, Dalleck says.

People with heart disease and diabetes especially have inherent difficulties with thermoregulation, he says. Individuals with these conditions should check with their doctors before using a sauna suit during exercise to see if it’s safe for them to do so.

Additionally, if you have any other health issues that may interfere with your ability to safely exercise or safely increase the intensity of your exercise, or if you have challenges with maintaining healthy hydration and blood pressure levels, it’s a good idea to check with your doctor before trying this trend.

Otherwise, healthy exercisers should be fine to take a suit out for a spin for light or moderate workouts.

It’s important to note that no one should use a sauna suit for long or high intensity workouts because of the risk of dehydration.

“If individuals follow good hydration practices, then the risk of dehydration is really nonexistent,” Dalleck says. Before exercising, Dalleck recommends 0.17 to 0.24 ounces of water for every 2.2 pounds of body weight.

During exercise it’s best to drink the amount of liquid you lose. A good estimate is 8 to 16 ounces of water per hour (drinks with electrolytes are also recommended for prolonged, strenuous workouts).

He encourages people who try the suits to hydrate prior, during, and after exercise to make sure your body has the fluids it needs. Good hydration habits and avoiding extreme workouts in the suits make it easier for your body to tolerate the magnitude of sweat loss, he says.

The Bottom Line on Sauna Suits

Sauna suits have some potential health benefits if used properly, yet more studies on the benefits of their use (and particularly longer-term use) are needed. If you wear one while working out, stay hydrated, avoid long or high-intensity bouts of exercise, and check with your doctor first if you have any health condition that might interfere with your ability to safely exercise in such clothing.

Doctors and nurses warn of “breaking point” in hospital ERs

Fri Nov 18 , 2022
A letter to the Biden administration jointly penned last week by 33 medical groups, that include the American College of Emergency Physicians (ACEP) and Emergency Nurses Association (ENA), paints a devastating picture of the ongoing crisis that is overtaking emergency departments across the country. EMT Giselle Dorgalli, second from right, looks at […] 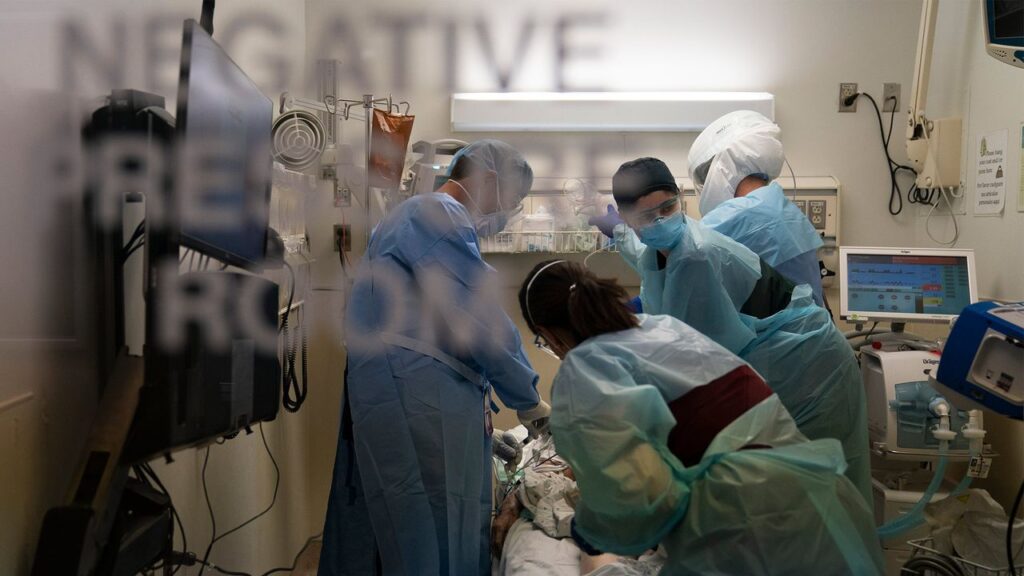