Dr Hussain was found in a car with his hands and legs tied. Hyderabad: In a dramatic rescue operation, a doctor in Telangana, who also happens to be a realtor, was rescued early this morning from inside a car in Anantpur district of Andhra Pradesh where he was held captive […] 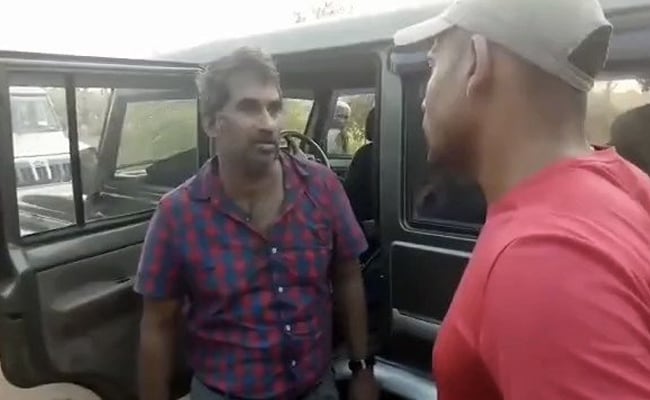 Dr Hussain was found in a car with his hands and legs tied.

In a dramatic rescue operation, a doctor in Telangana, who also happens to be a realtor, was rescued early this morning from inside a car in Anantpur district of Andhra Pradesh where he was held captive with his hands and legs tied up. Seven people have been arrested by the police.

The dentist was kidnapped from his hospital at Kismatpur in Ranga Reddy district yesterday afternoon by five men wearing burqas. The kidnappers had reportedly demanded a ransom of Rs. 10 crore through Bitcoins.

“The Cyberabad Police busted a sensational kidnapping gang which was responsible for abduction of a Dentist for ransom of Rs 10 Crores from Bandlaguda Jagir Village under Rajendranagar Police Station limits on 27.10.2020 at 1315 hrs. Besides arresting the accused persons, the abducted person was also rescued from the clutches of the deadly inter-state criminal gang safely,” the police said in a statement.

Dr Hussain told the police he was forcibly taken away in his own Innova and kept captive inside a room in Hyderabad’s Madhapur which falls under the Cyberabad police commissionerate.

The kidnappers spoke Marathi, Dr Hussain had told the police.

The doctor was later handed over to four others who were in a Bolero, and spoke in Kannada. They were reportedly asked to go to Bengaluru or Shivamogga in neighbouring Karnataka.

Early this morning, Telangana Police had reportedly alerted Andhra Pradesh Police that he was being taken in a Bolero that may be heading towards Bengaluru.

Andhra Pradesh police officers were on the ground since 4 am today, as part of “Operation Muskaan” across the state, to rescue children working as labour or in other vulnerable situations.

With the police alerted on the ground, Anantpur Police had placed a lorry across the road just before the town to slow down the Bolero that was said to be running at a speed of over 100 km per hour.

The driver apparently got suspicious and overrode the road divider. Once he realised the police was on his chase, they drove off the main roads and escaped into the rural areas.

“Our SI (Sub-Inspector) was smart and tracked the tyre marks on the mud track. Since they were driving at 150 kmph, it was not possible to give a chase. But our police spotted the vehicle parked in a rural location and tried to surround it. Three of them ran away. We caught one accused and the victim was found tied up and tortured, with scratch marks all over,” the police chief of Anantpur told NDTV this morning.

Sun Nov 29 , 2020
CAMBRIDGE, Mass.–(BUSINESS WIRE)–Foundation Medicine today announced it has entered into a non-exclusive agreement to license two foundational patent families from TwinStrand Biosciences, a next-generation DNA sequencing technology company based in Seattle. The patented TwinStrand Duplex Sequencing™ technology is a biochemistry- and software-based platform that enables researchers and clinicians to detect […]